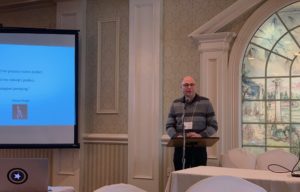 On Sunday March 3, 2019, C. Alec Pollard, Ph.D. presented at the annual conference of OCD NJ. Dr. Pollardis Founder and Director of the Center for OCD and Anxiety-Related Disorders at Saint Louis Behavioral Medicine Institute and Professor Emeritus of Family and Community Medicine at Saint Louis University. He is a licensed psychologist who works with a range of obsessive-compulsive and anxiety-related disorders. He is on the Scientific and Clinical Advisory Board of the International OCD Foundation and chairs the organization’s Training Subcommittee, including a national training initiative called the Behavior Therapy Training Institute.  Dr. Pollard also serves on the Scientific Advisory Committee of the Canadian Institute for Obsessive-Compulsive Disorders and the Obsessive-Compulsive Cognitive working group research collaborative. He is former chair of the Clinical Advisory Board of the Anxiety and Depression Association of America. He serves as a reviewer for a number of professional journals and conference program committees and has authored over 100 publications, including 2 books.

Dr. Pollard used humor and knowledge to inform the audience of the following areas to be addressed in the talk: 1) the general nature of perfectionism, 2) academic perfectionism, 3) occupational perfectionism, 4) treatment, and 5) case illustration. After a brief history of the perfectionism concept, he discussed if perfectionism is all bad, and responded by pointing out that hard work and getting a job well done are good things.

A perfectionistsets unobtainable goals, maintains goals despite experience, judges self on outcome, and motivated by fear of negative outcome. A pursuer of excellence, on the other hand, sets obtainable goals, modifies goals based on experience, judges self based on multiple criteria, and motivates by positive outcomes. Other perfectionism concepts include other-oriented perfectionism, which expects everyone else to be perfect, perfectionistic self-presentation, which presents a perfect image to others, and perfectionistic cognitions, which consist of anxious automatic thoughts.

Some examples of perfectionistic beliefs include “for me, things are not right if they are not perfect,” “if I don’t do a job perfectly, people won’t respect me,” “even minor mistakes mean a job is not complete,” “in order to be a worthwhile person, I must be perfect at everything,” and “if I can’t do something perfectly, I shouldn’t do it at all.”

OCD and perfectionism have two main symptoms: 1) avoidance of things that trigger anxiety (obsessions), and 2) engaging in repetitive behavior to neutralize anxiety (compulsions). Two main signs of dysfunctional perfectionism are procrastination (avoidance of tasks) and taking an excessively long time to complete tasks (because of compulsions). Implications for OCD treatment include exposure to tasks they procrastinate doing and response prevention for perfectionistic compulsions. Other shared features include intolerance to uncertainty and just right, not-right, and obsessions of incompleteness.

He then went on to share examples of academic perfectionism and occupational perfectionism, and discussed treatment such as working up the hierarchy for exposures. Other components of CBT include engagement, goal setting, motivation, psycho-education, cognitive interventions, and skills training (e.g., time management, organization, anti-procrastination strategies). Dr. Pollard then illustrated the above treatment components through an enlightening case illustration with specific coping scripts and response prevention exposure exercises.

The conference continued with an emotional highlight: the Living with OCD panel moderated by Dr. Weg. The panel consisted of a 13 year old female who at age five, felt things were “not right” and “grossed out,” and “everything dirty felt it could kill me.” She ritualized with excessive baby wipes and explained that an ERP therapist assisted her to challenge the OCD effectively.

A 22 year old male who graduated from college last year and currently working. He recalls having OCD as long as he can remember and crying as a kid when things didn’t “feel right.” He described the stress of graduating from college led to excessive checking, repeating, and hand washing compulsions. Shortly after starting work, he took a leave of absence and “ERP worked like a charm,” along with medications for OCD, and OCD self help books. He described learning to live with uncertainty about everything.

A 14 year old female who recalls her OCD began around age eight with “touching something five times and felt had to do it.” She ritualized by seeking reassurance and wearing her hair slick back in a low ponytail, or “I felt like something bad will happen.” She obsessed about the fear of losing control and dying. She described her OCD currently in phases, similar to the Regina character in the Mean Girls movies, but overall better managed.

An 11 year old female who used dance to relieve her stress and better manage her OCD. She discussed obsessing about germs and feared others throwing up. The rituals she used included reassurance seeking from her family and “over washing my hands until they were bleeding,” for example. She found “the right specialist for OCD and the exposures were very helpful,” such as watching videos of other people getting sick and not checking the car door. She said that she’s “thankful for the opportunities” to fight OCD and “wants to be a role model for kids with OCD.”

used her intrusive, obsessive thoughts. She said that “OCD attaches to what you hold dear,” and her obsessions involved the fear of harming kids since she cared about children as a teacher. She discussed that after four therapist and 26 years of struggling, she found her ERP therapist and learned that “thoughts have no meaning and thoughts can dissipate.” She achieved her life goal against the OCD by becoming a mother to a little boy, “which didn’t feel possible before because of OCD’s lies.”

A 27 year old female who works in NYC, and recalled her OCD beginning around high school with the fear of contaminated meat. Rituals included excessive hand washing, showering, and wet wipes if other people near her ate meat. She decided, with the motivation of her therapist, to “continue life in my dirty state” instead of brief periods between rituals. She reported currently showering 10-15 minutes, reduced hand washing, “hugging anyone, and not letting meat affect my life.”

A 18 year old female who noticed in 8th grade the urge to switch lights on and off and “daily rituals all the time,” which resulted in being late to junior year 88 times. She proudly stated that she’s now managing her OCD symptoms well with ERP and able to talk back to OCD by giving it a name. She shared that she benefited from a residential program this past summer.

A 22 year old male who is currently working but plans to finish his degree and return to college, which he had to leave because of his perfectionistic OCD symptoms. He reported noticing at 17 years old checking and rechecking rituals, such as locking his car over and over until it “felt right,” which interfered with football practice. He recalled each email taking one hour to write, showering taking one hour, and counting endlessly. The proper treatment for him included a combination of consistent ERP therapy and medications, and he reinforced the importance of triggering checking and resisting compulsions.

Each shared their brave experiences living with OCD, and then audience members asked the panel questions about a variety of topics. As in previous years, the panel members encouraged, informed, and offered hope to the individuals with OCD, their loved ones, and the professionals that treat them.