Ask The Experts:
A Panel of OCD Treatment Specialists

Marla Diebler, Psy.D, is the Vice President of OCD New Jersey, and is a licensed psychologist in New Jersey and Pennsylvania. She is the Founder and Executive Director of The Center for Emotional Health of Greater Philadelphia, LLC, an outpatient behavioral health treatment center that specializes in the evidence-based treatment of anxiety and obsessive-compulsive spectrum disorders located in Cherry Hill, New Jersey. Dr. Deibler serves on the Board of Directors of the Trichotillomania Learning Center (TLC) as well as the Faculty of TLC’s Professional Training Institute.

Rachel Strohl, Psy.D, is Secretary on the Board of Directors at OCD New Jersey, and is a New Jersey licensed psychologist. She has been an associate at Stress and Anxiety Services of NJ in East Brunswick for over a decade. She has been certified in the treatment of OCD by the BTTI and BFRBs such as skin picking and compulsive hair pulling by TLC. Dr. Strohl has developed a specialization in the cognitive behavioral treatment of anxiety disorders and OCD Spectrum Disorders, and works with adults, adolescents, and children.

Dr. Jordan Levy, Ph.D., is a board member of OCD New Jersey, and is a licensed psychologist practicing in Livingston, New Jersey and Manhattan.  He works primarily with adults, adolescents and children living with anxiety and OCD, including the Purely-Obsessional subtype.  Dr. Levy has previously established an innovative online OCD support group as well as a comprehensive intensive treatment program for individuals suffering with OCD.

On December 11, 2017, Drs. Deibler, Strohl, and Levy presented as a panel of experts at the quarterly meeting of OCD New Jersey. The audience consisted of professionals in the field, as well as individuals or family members of those suffering from OCD symptoms.  Audience members asked a number of relevant and thought-provoking questions to the panel, which led to an informative and stimulating discussion. 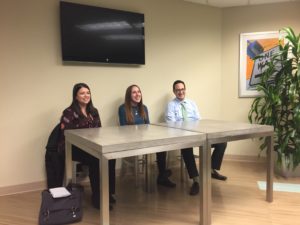 Attendees were interested in the treatment of “Pure O” OCD versus more classic types of OCD, and whether professionals would use the same type of therapy approach.  Dr. Levy discussed the use of script writing as an Exposure and Response Prevention (ERP) technique for individuals with more thought-based OCD who demonstrate minimal compulsions.  Dr. Strohl added that with this presentation of OCD, the ritual is typically avoidance, and discussed how the goal is to reduce this avoidance.  Dr. Deibler discussed the use of a mental script to replace rituals, which serves to break ruminative thinking.  A member of the audience added to the discussion by asking if response prevention, especially mental scripts, ever serves as a new ritual or as reassurance.  The experts offered their opinions on this, and how to address it in treatment.  For example, they described how the script should match the obsession and should serve the function of heightening anxiety rather than reducing anxiety, which is the opposite of reassurance.

A question was posed from a mother of a teenage daughter with OCD on how parents can help encourage their children to complete exposures in the moment, and wanted suggestions for specific things parents can say.  Dr. Levy offered the suggestion to validate and support her, and further explained that there is no “magic phrase”.  Rather, the best thing a parent can do is encourage their child to follow the ERP plan that was set up with their therapist.  Dr. Strohl suggested planning ahead the night before, and validated the mother’s frustration in those moments.  She further explained that it helps to be a team fighting against OCD, which can build the child’s motivation to fight back.  Dr. Deibler reminded the group how uncomfortable it feels for the person experiencing OCD, and how important it is to understand and validate those feelings. 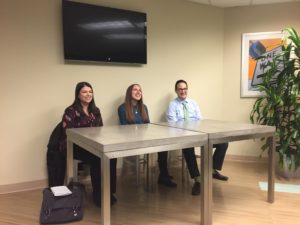 Another question was presented about the difference between OCD and Body Dysmorphic Disorder (BDD), and ways to treat BDD specifically.  Dr. Deibler discussed using ERP for rituals related to a diagnosis of BDD, and further posited that the treatment is based on the same principles as ERP.  A member of the audience recommended the book “No Body’s Perfect”, and expert panelists suggested work by Sabine Wilhelm for more information on BDD treatment.

A discussion on support groups for OCD took place, including whether or not this type of treatment modality is effective.  Dr. Strohl explained that groups can be very useful to normalize symptoms, and offer support, but it is important to also be completing specific ERP-focused treatment in conjunction with support groups.  Attendees were interested in ways to find OCD groups, and the panelists directed them to the International OCD Foundation website (http://iocdf.org) as well as OCD New Jersey’s website (https://www.ocdnj.org).